The WEI is an index of ten daily and weekly indicators of real economic activity, scaled to align with the four-quarter GDP growth rate. 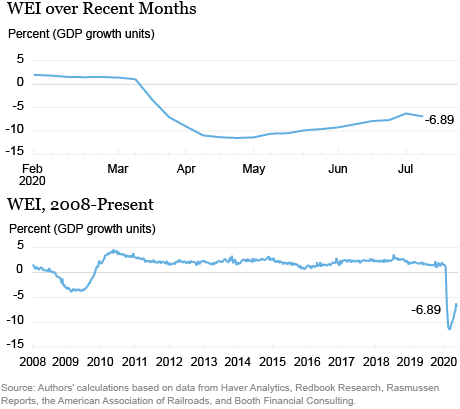 Editor’s note: In an earlier version of this update, both charts incorrectly depicted the last three data points. The charts have been corrected. The commentary, the reading highlighted in the charts, and the data in the accompanying Excel file are unchanged. (July 10, 11:47 a.m.)


What is the Weekly Economic Index (WEI)?
The WEI is an index of real economic activity using timely and relevant high-frequency data. It represents the common component of ten different daily and weekly series covering consumer behavior, the labor market, and production. The WEI is scaled to the four-quarter GDP growth rate; for example, if the WEI reads -2 percent and the current level of the WEI persists for an entire quarter, we would expect, on average, GDP that quarter to be 2 percent lower than a year previously.
What are the key features of the approach?
The WEI extracts the first principal component of the ten underlying series. This approach serves to filter out the high level of noise prevalent in individual weekly releases—while also providing a more representative measure than any one weekly data series Each Tuesday, an initial estimate of the WEI for the past week is computed based on the historical relationship between the WEI and the available series. This value is updated on Thursday and again the following Tuesday with additional releases, before being finalized the following Thursday. Historically, the WEI tracks familiar series such as GDP and industrial production very well, but provides a far timelier signal.
What are the input data?
The WEI is composed of ten underlying series, detailed in the table below. To measure consumer behavior, we include the Redbook same-store retail sales index and the Rasmussen Consumer Index. To measure labor market conditions, we include initial and continuing unemployment insurance claims, the American Staffing Association Index of temporary and contract employment, and federal tax withholding data from Booth Financial Consulting. For production, we include U.S. steel production from the American Iron and Steel Institute, U.S. electricity output data from the Edison Electric Institute, a measure of fuel sales based on Energy Information Administration data, and total railroad traffic from the Association of American Railroads.

How do you transform the input series so that they are in comparable units?
The native units for Redbook retail sales and the tax withholding series are year-on-year percentage changes. We transform the other series to comparable units by taking 52-week log changes. This serves two purposes. First, it provides a reasonable seasonal adjustment of the raw data. Second, by casting the WEI in annual percentage changes, we construct an index well-suited to match the units of four-quarter GDP growth. Additionally, all series are standardized before the principal component is estimated.
When and why was the WEI developed?
The WEI is based on earlier work described in Council of Economic Advisers (2013). The Lewis, Mertens, and Stock WEI presented here was initiated in early March 2020 in response to the need for tools to monitor the rapid evolution of economic conditions at the onset of the COVID-19 pandemic. The index offers a timelier reading of economic developments than common indicators reported at monthly or quarterly frequencies, and available only at a considerable time after the reference period has ended.
How does the WEI differ from the New York Fed Staff Nowcast?
The WEI differs from the New York Fed Staff Nowcast in two key ways. First, the nowcast is designed to target quarterly GDP growth. While the WEI is ultimately scaled to GDP units, it is a measure of real economic activity more broadly, providing a strong signal of industrial production, employment, and other series, as explored in Lewis, Mertens, and Stock (2020). Second, by virtue of targeting quarterly GDP growth, the nowcast smooths variation from week to week, since the target is a thirteen-week average of economic conditions. The WEI seeks to represent precisely that week-to-week variation.

Council of Economic Advisers. 2013. “Economic Activity during the Government Shutdown and Debt Limit Brinkmanship,” Report of the Executive Office of the President, October.

How to cite this report: Lewis, Daniel J., Mertens, Karel, and Stock, James H., Weekly Economic Index, https://www.newyorkfed.org/research/policy/weekly-economic-index.
About the WEI
The Weekly Economic Index (WEI) provides a signal of the state of the U.S. economy based on data available at a daily or weekly frequency. It represents the common component of ten different daily and weekly series covering consumer behavior, the labor market, and production. It is updated Tuesdays and Thursdays at 11:30 a.m., using data available up to 9:00 a.m.