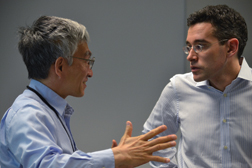 Resident scholars are selected from the top academic and policy institutions in fields related to the Bank’s broad policy interests. The scholars pursue their own research while providing intellectual leadership by advising and collaborating with our staff of more than sixty economists. They present their own work at Research Group seminars and attend presentations by others.

The resident scholars also work closely with the director of research, and have the opportunity to contribute to the Bank's main policymaking discussions on topics such as monetary policy and macroeconomics, international economics, banking supervision and regulation, capital markets, financial stability, and applied microeconomics with an emphasis on regional and national issues.

The program complements our Visiting Scholars Program, in which economists from major research institutions present their own work and make themselves available to discuss our staff's current research.

Current Resident Scholar
For the 2019-20 academic year, the Research and Statistics Group is pleased to have in residence Simon Gilchrist, Professor of Economics at New York University.

Prior to arriving at New York University, Gilchrist was a professor at Boston University and also served as a staff economist at the Board of Governors of the Federal Reserve System. In recent years, he has served as an academic consultant to the Board as well as to the Bank of Canada, Bank of England, Banque de France, Bank of Japan, the Federal Reserve Banks of Atlanta, Boston, Chicago, New York, and San Francisco, and the International Monetary Fund.

Bank of America Eminent Scholar in Finance at the University of Florida
Douglas Gale, 01/09 - 12/10

Professor of Economics at the University of North Carolina at Chapel Hill
John Leahy, 01/08-12/08

Henry and Lucy Moses Professor of Economics at New York University and Chair of the Economics Department
Suresh M. Sundaresan, 01/06-07/06

Nanyang Technological University Professor of Finance at the MIT Sloan School of Management
Tools
Search research publications
Related New York Fed Content
Ph.D./Economists
Visiting Scholars
Research Conferences
By continuing to use our site, you agree to our Terms of Use and Privacy Statement. You can learn more about how we use cookies by reviewing our Privacy Statement.