Joining the New York Fed as a Research Economist 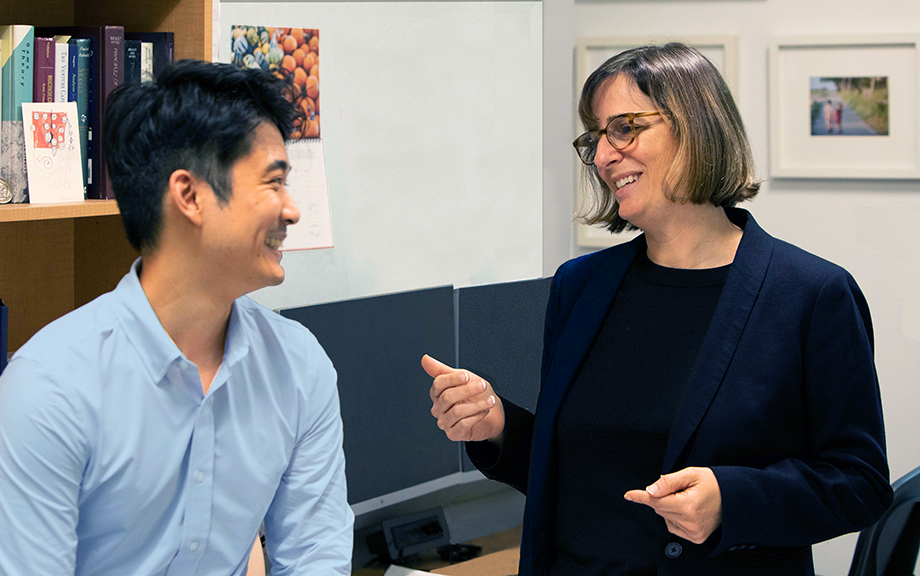 The Research Group recruits both recent Ph.D. recipients and experienced economists. As a new hire, you will join a team of more than sixty economists in supporting the principal missions of the Bank and bring added breadth and depth to the team’s work in the areas of monetary policy, household and public policy, financial intermediation, and financial stability.

The application period for Ph.D. positions with a summer-fall 2023 start date is now closed. APPLY NOW
About the position:


A collegial and collaborative culture:

An environment where ideas flourish:

Wide exposure for your research:

In addition to the Bank’s robust package of health, financial, and lifestyle benefits, economists enjoy:

New economists will work in one of twelve departments within four policy-focused divisions. Meet the economists and research advisors in each department.

The work of an economist at the New York Fed is similar in some important ways to that of an economist in academia, especially regarding research. In both cases, the goal is to do research that breaks new ground in our understanding of some aspect of the economy. As in academia, the work can be theoretical or empirical, or a combination of the two; can involve traditional econometric analysis, simulation, or survey results; and can rely on data that is widely used in the profession or be based on new sources of information not traditionally accessed by economists.

What distinguishes research by our economists is that it tends to be grounded in the real-world questions related to the Fed’s policy missions. Although the Bank doesn’t direct research, economists often find important, natural synergies between their independent academic-style research and their policy work. They are able to bring the insights and techniques they’ve developed through their research to work on the Fed’s policy missions.

At the same time, working on these policy issues suggests new topics for research, areas where the current state of inquiry or knowledge could be enhanced, and where the frontier of work could be pushed forward.

New York Fed economists have exceptional opportunities to join with others in the coordinated study of specialized economic data.

Center for Microeconomic Data. The New York Fed’s Center for Microeconomic Data is an important hub for research on the expectations and behavior of individual economic agents. Two large data collection projects anchor the Center: the New York Fed Consumer Credit Panel/Equifax and the Survey of Consumer Expectations. While central banks are often thought to specialize in macroeconomic analysis, the data and research emerging from the Center contribute importantly to the Fed’s policy decisions. The Center’s regular releases are followed closely by government policymakers and the media, and have helped shape public debate on issues such as the nation’s growing student debt burden. The Center’s work has also served as a catalyst for new research by academic economists, who often partner with our economists on studies of this rich body of data.

International Banking Research Network. The International Banking Research Network (IBRN) is a community of central bank researchers who study global banks and their activities. Established in 2012 by a New York Fed economist and researchers from Austria, Germany, and the United Kingdom, the IBRN seeks to improve policy discussion by using bank-level regulatory data in the joint analysis of key questions. Researchers in the network have access to the “micro” data underlying the Bank for International Settlements’ (BIS) international banking statistics, a resource that allows them to design experiments and achieve results not possible with studies that draw lessons exclusively from the experience of a single country.

New York Census Research Data Center. The Research Group, on behalf of the New York Fed, helped establish a U.S. Census Bureau Research Data Center in New York City. The Bank is a founding member of the consortium that supports the facility, together with leading universities and research organizations in New York State. At the Data Center, researchers can securely access selected confidential economic and demographic microdata gathered by the U.S. Census Bureau.

Collaboration and diversity foster the kind of innovative thinking that leads to critical insights, new analytical techniques, and empirical and theoretical advances. For the Research Group, having diversity in many forms—in gender, ethnicity, and race, in training, and in economic specialization and approach (theorists and empiricists)—is critical.

To that end, the Bank seeks both to advance diversity among our research economists and to take a leadership position in promoting diversity in the economics profession. Recent initiatives in support of these goals include:
Access to the Bank’s Employee Resource Networks

Economists can participate in any of the Bank’s ten employee resource networks, which provide professional opportunities for staff to develop leadership skills, shape new initiatives, and facilitate mentoring and networking. The networks also bring in outside speakers, assist with recruiting diverse candidates, and partner with nonprofit and community groups.
Recognition for LGBTQ Workplace Equality

In 2022, for the fourth year in a row, the New York Fed received a perfect score on the 2022 Corporate Equality Index (CEI), a benchmarking survey and report on corporate policies and practices related to LGBTQ workplace equality, administered by the Human Rights Campaign Foundation.

I would like to apply for an economist position with the New York Fed’s Research & Statistics Group. What documents are needed to complete my application?

As part of the application process, you must provide: the (expected) completion year of your Ph.D., the title of your job market paper, the name(s) of your advisors, your primary and secondary fields of study, and three references’ names and email addresses. Your cover letter, CV, and job market paper and/or two writing samples must also be attached. All fields must be complete, and documents uploaded, for your candidacy to be considered.

What are the eligibility requirements?

As you go through the application form, you will be prompted to answer a series of pre-screening questions that will help us determine your eligibility. We may follow up later in the process to further verify. If you have questions about eligibility or the application process, please email Services.Placement@ny.frb.org.

The Economist position requires access to confidential supervisory information and/or FOMC information, which is limited to "Protected Individuals" as defined in the U.S. federal immigration law. Protected Individuals include, but are not limited to, U.S. citizens, U.S. nationals, and U.S. permanent residents who either are not yet eligible to apply for naturalization or who have applied for naturalization within the requisite timeframe. Candidates who are not U.S. citizens or U.S. permanent residents may be eligible for the information access required for this position and sponsorship for a work visa, and subsequently for permanent residence, if they sign a declaration of intent to become a U.S. citizen and meet other eligibility requirements.

In addition, all candidates must undergo an enhanced background check and comply with all applicable information handling rules, and all non-U.S. citizens must sign a declaration of intent to become a U.S. citizen and pursue a path to citizenship.

How do I know if my application was received?

Once you submit your application, you will receive an email from rb@myworkday.com confirming receipt. If you do not see this email in your inbox, please check your spam folder. Do not reply to the message; it is sent by an automated system.

How do my references submit their letters?

Once the application is complete, candidates will receive instructions for the reference letter submission process.

How many references can I include?

We request that you provide names and contact emails for three references.

When do my references have to be submitted by?

Reference letters are accepted up to one week after the application deadline.

How can I check the status of my application?

You can view the status by logging into the Workday account that you used to submit your application at https://rb.wd5.myworkdayjobs.com/FRS.

How will interviews be conducted?

Consistent with guidance from the American Economic Association (AEA), all ASSA interviews will take place virtually. Candidates will receive specific details prior to their interview.

How Do I Apply?
The application period for Ph.D. positions with a summer-fall 2023 start date is now closed.
By continuing to use our site, you agree to our Terms of Use and Privacy Statement. You can learn more about how we use cookies by reviewing our Privacy Statement.