Among firms that de-prioritized bank-related financing, business loans and credit cards were the most frequently mentioned products.
8. From 2008 to 2010, reliance on commercial bank loans contracted among all but the oldest (21+ years) firms, while credit card reliance increased by all groups except 0-5 year old firms.

Many small businesses continue to struggle even though the recession has officially ended. According to the 2010 FRBNY Small Business Finances Poll, conducted in August 2010, 75 percent of regional firms reported being unable to secure all the credit that they sought.

The most recent poll findings show how small businesses are financing their operations: 68 percent included bank credit as one of their top-three sources of financing. However, notable changes occurred between 2008 and 2010: reliance on bank credit increased, especially broader use of credit cards, while commercial bank loan use fell among all but the oldest firms.

In June-July 2010, the Federal Reserve Bank of New York's Office of Community Affairs polled 426 small-business owners on their recent business performance, financing choices, and borrowing experiences. This website presents analysis of a subset of the 2010 poll results which were not highlighted in the Fact and Trends report published in October 2010.

In total, there were 426 poll respondents; however, it is important to note that the number of respondents to each individual question varied. The graphs featured on this page each identify the number of respondents (n=) for relevant questions. If the analysis required cross-tabulation of multiple questions, only firms which responded to all relevant questions were included. For example, in the graphs describing changes in behavior between 2008 and 2010, only firms which responded to questions on 2008 and 2010 were included in the analysis.

The Federal Reserve Bank of New York's Office of Regional and Community Outreach polled small businesses about their business performance, financing choices, and borrowing experiences. The poll was conducted online and distributed through a network of local government and nonprofit partners. 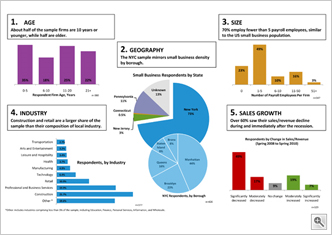 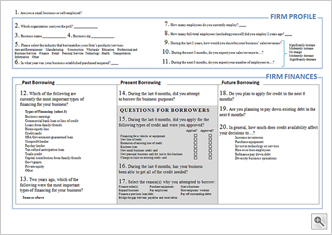 The Brooklyn Chamber of Commerce

The Entrepreneurs Forum of Greater Philadelphia

The Manhattan Chamber of Commerce