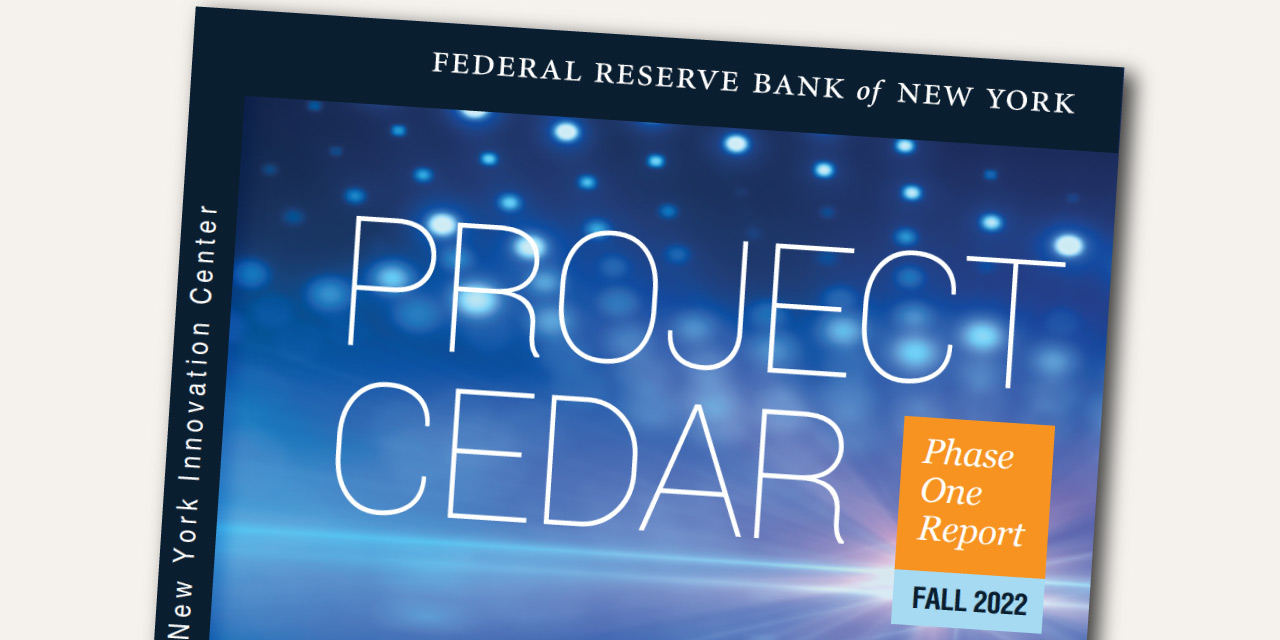 Project Cedar is the inaugural project of the New York Innovation Center (NYIC). It is a multiphase research effort to develop a technical framework for a theoretical wholesale central bank digital currency (wCBDC) in the Federal Reserve context.

In Phase I of Project Cedar, a prototype for a wholesale central bank digital currency was developed to demonstrate the potential of blockchain to improve the speed, cost, and access to a critical element of the wholesale cross-border payments market—a foreign exchange (FX) spot transaction.

While cross-border payments function well, there are opportunities for improvement. In general, it takes around two days for a FX spot transaction to settle. During these two days, counterparties are exposed to settlement, counterparty, and credit risk which, among other things, can hinder an institution’s ability to access liquidity.

In a simulated wholesale FX spot transaction, Project Cedar developed a wholesale central bank digital currency prototype to test whether blockchain technology can deliver fast and safe payments. Core to Project Cedar’s solution concept was the distributed ledger infrastructure—a multi-ledger construct in which each currency was maintained on a separate ledger, operated by its respective simulated central bank.

The Phase I prototype included design choices such as a permissioned blockchain network, utilizing an Unspent Transaction Output (UTXO) data model, and Rust as the primary programming language.

Project Cedar showed that blockchain-enabled cross-border payments can be faster, simultaneous, and safer:

Phase I of Project Cedar revealed key questions and highlighted areas for further research, specifically around ledger platform design, interoperability, and security. As part of its continued wCBDC research, the NYIC announced Project Cedar Phase II x Ubin+, a joint experiment with the Monetary Authority of Singapore to explore questions related to interoperability and ledger design, including how to achieve concurrence and best enforce atomic transactions across different blockchain-based payment systems.


Project Cedar aims to contribute to a broad and transparent public dialogue about CBDC from a technical perspective. Project Cedar is not intended to advance any specific policy outcome, nor is it intended to signal that the Federal Reserve will make any imminent decisions about the appropriateness of issuing a retail or wholesale CBDC, nor how one would necessarily be designed.

What Is Project Cedar? A Video Explainer