In order to support a successful transition away from U.S. dollar (USD) LIBOR, and as administrator of the Secured Overnight Financing Rate (SOFR), the Federal Reserve Bank of New York (New York Fed), in cooperation with the Treasury Department’s Office of Financial Research (OFR), is proposing to publish daily three compounded averages of the SOFR with tenors of 30-, 90-, and 180-calendar days. The New York Fed plans to initiate publication of these averages in the first half of 2020.1

In addition to these three SOFR averages, the New York Fed is also proposing to publish daily a SOFR index that would allow the calculation of compounded average rates over custom time periods.

The Federal Reserve Board and New York Fed convened the Alternative Reference Rates Committee (ARRC) to, among other reference rate reform objectives, recommend an alternative rate to USD LIBOR and to develop plans to promote the use of that alternative. In June 2017, the ARRC selected the SOFR as its preferred alternative to USD LIBOR to be used in new issuance of certain USD derivatives and other financial contracts. In April 2018, the New York Fed, in cooperation with the OFR, began publishing the SOFR and two other new reference rates based upon transactions in the market for repurchase agreements (repos) secured by Treasury securities. At a roundtable discussion in July 2018, the ARRC discussed the ways that publishing compounded averages of the SOFR could help facilitate adoption of the benchmark rate. These included increased reference in consumer loans and floating rate notes (FRNs), which, in turn, could encourage greater use of SOFR derivatives to hedge positions in these instruments. The ARRC subsequently released a white paper in April 2019 to help explain how an average of the SOFR can be used in cash products.

The SOFR averages and the index, as proposed herein, would employ daily compounding, which should more accurately reflect the time value of money than a simple average.2 The use of compounding would also align with the International Swaps and Derivatives Association’s methodology for use of overnight rates in swap contracts, which may be preferred by issuers of SOFR-linked liabilities for hedging purposes.3 More accurate hedging, in turn, may also contribute to better market functioning.

Although compounded averages of the SOFR are already being incorporated into many financial contracts, a readily available source of standardized, published SOFR averages, in addition to a SOFR index, should encourage broader usage and further support the transition from USD LIBOR.

Consistent with the manner in which interest is treated in the derivatives market and how interest accrues in overnight repo transactions, interest would compound only on business days, as determined by the SOFR publication calendar. Simple interest would apply to any day that is not a business day, at a rate of interest equal to the SOFR value for the last available business day. In other words, when handling a typical weekend, the averages and the index would use the SOFR value from Friday (later published on the following Monday) for Friday, Saturday, and Sunday, multiplying that value by the three days, and compounding the rates/index once by that adjusted term. Holidays will be treated in a similar fashion.4 Furthermore, in accordance with broader USD money market convention, interest will be calculated using the actual number of calendar days, but assuming a 360-day year.5

The table below illustrates the proposed compounding methodology:

Note that, whereas the SOFR is published one business day following its value date (the day when overnight trades were negotiated), the SOFR averages and index are published on their value date. This approach aligns with the economics of the repo market, where the repo rate determines the cost of borrowing through the transaction’s maturity date. For the overnight repo transactions comprising the SOFR, the maturity date is always the next business day (when the SOFR is published), so the index and averages will always have a value date one business day later than the value date of the final SOFR observation included.

Three compounded averages based on the SOFR are proposed with tenors of 30-, 90-, and 180- calendar days and would be published each business day just after the publication of the SOFR at approximately 8:00 a.m. ET. These tenors are similar to the interest payment periods of most cash instruments and LIBOR-referencing derivatives.6,7

Each respective SOFR average would span the relevant number of historical calendar days, with the final value being the SOFR published that day (for example, for a typical Monday, the final SOFR used in the calculation of the compounded averages would be published that day, but would reflect activity from the previous Friday and be applied over three days).8 These values would then be compounded according to the following formula, consistent with the compounding methodology used for overnight indexed swaps:

The SOFR index would measure the cumulative impact of compounding the SOFR on a unit of investment over time, with the initial value set to 1.00000000 on April 2, 2018, the first value date of the SOFR.9 The index would be compounded by the value of each SOFR thereafter. As a result, the first official published SOFR index value will reflect the effect of compounding the SOFR each business day since April 2, 2018.

On each day the SOFR is published, the SOFR index would be calculated as:

The figures below provide insight into how the SOFR averages and SOFR index would have looked based on historical values of the SOFR going back to April 2018. Indicative values, which should not be considered official published rates, can be found here. 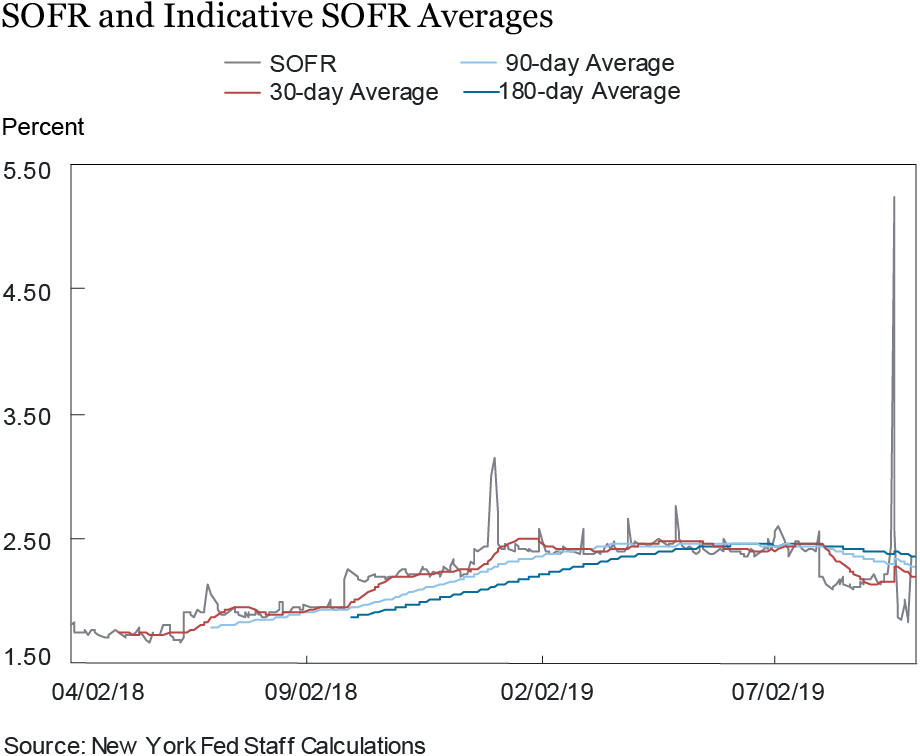 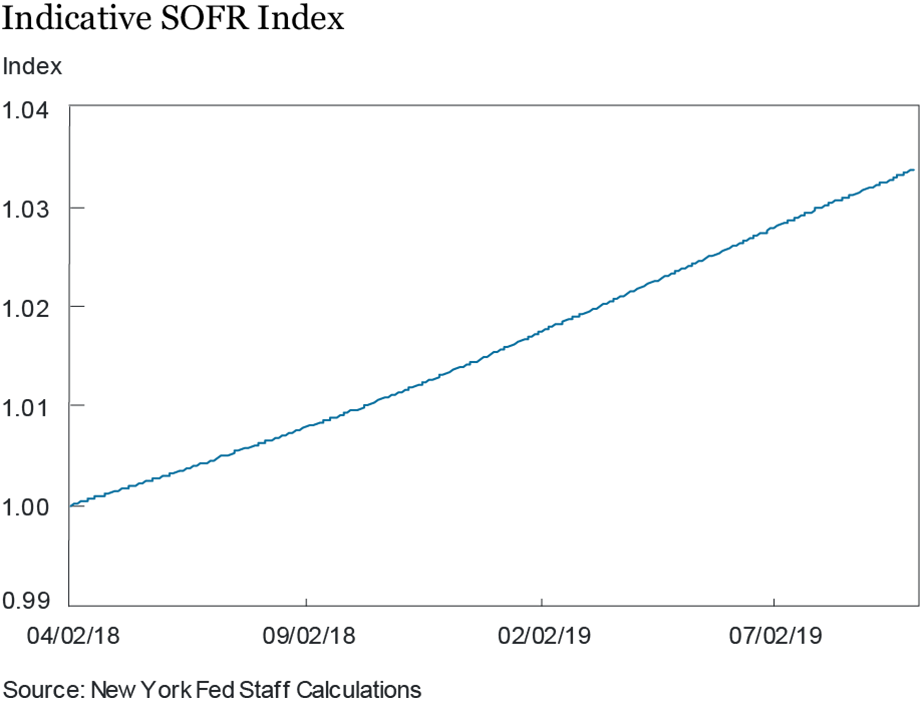 As is the case with the SOFR, the averages and index will be published each business day that is not broadly recognized as a holiday for secondary market trading of U.S. government securities. The averages and the index would be published on their own dedicated web page on the New York Fed’s public website, separate from the SOFR, shortly after the SOFR is published at approximately 8:00 a.m. ET. The SOFR averages and index would only be revised on a same-day basis (at approximately 2:30 p.m. ET) and only if either that day’s SOFR publication were also being revised or an error were discovered in the calculation of the averages or index.12

The calculation of the averages and index would rely solely on the published values of the SOFR. No new data collections will be required. Additional information about the SOFR and other Treasury Repo Reference Rates can be found here.

In the construction and publication of these averages and index, the New York Fed will endeavor to adopt policies and procedures consistent with best practices for financial benchmarks, to the extent appropriate, so that the three averages and index would be compliant with the IOSCO Principles for Financial Benchmarks (“the IOSCO Principles”). For more information about how the underlying SOFR complies with the IOSCO principles, please see the New York Fed’s Statement of Compliance.

Consistent with the IOSCO Principles and in accordance with its reference rates public consultation policy, the New York Fed requests comments on the above proposal to calculate and publish compounded averages of the SOFR and a SOFR Index. Comments should be submitted to the New York Fed by December 4, 2019 via email to rateproduction@ny.frb.org. Specifically, the New York Fed asks for responses to the following questions:


1As indicated in the January 2019 Federal Open Market Committee minutes.

7 Many cash and derivative products have a 1-month, 3-month, or 6-month interest period structure; however, such calendar-based structures can result in several different interest periods ending on the same day, which would complicate the production of published averages. Under the proposal here, the start date of each average would be exactly 30-, 90-, or 180-days prior to the publication date. In some instances, this start date would occur on a weekend or holiday. In order to preserve the fixed-day count structure, the proposed averages would prorate the rate from the preceding business day. Thus, if the start date was on a Saturday, the rate for the previous Friday would be applied for 2 calendar days.

8 As described above, the SOFR published on a given day reflects overnight trades negotiated on the prior business day.

10 For more information about how this calculation might be used, please see the ARRC’s SOFR FRN Convention Matrix.

12 SOFR revisions will only be affected on the same day as initial publication and will only be republished if the change in the rate exceeds a pre-established threshold—currently, one basis point. For more detail on the revision policy, please see the Additional Information about the Treasury Repo Reference Rates.