When the Facts Change…

May 14, 2019
John C. Williams, President and Chief Executive Officer
Remarks at the 9th High-Level Conference on the International Monetary System, Zürich, Switzerland As prepared for delivery

John Maynard Keynes is credited with saying, “When the facts change, I change my mind. What do you do, sir?” Over the past decade, policymakers across the globe have been focused on getting their economies and financial systems back in order. But at the same time, a sea change in supply-side realities has taken place. These changes have redefined what is achievable, and challenged conventional wisdom on monetary policy.

Shifting demographic trends and a slowdown in productivity are driving slower trend growth and historically low levels of real interest rates across the globe. This new set of facts requires us to rethink what we once knew, reassess how to best foster strong and stable economies, and ready ourselves for the future.

With that start, it’s time I remind everyone that the views I express today are mine alone and do not necessarily reflect those of the Federal Open Market Committee or others in the Federal Reserve System.

The Road to Recovery

Following the global financial crisis, central banks took bold and decisive actions to right their economies and bring them back to health. Short-term interest rates were brought to near zero—in some cases below zero—and held there for many years (Figure 1). The combination of low short-term rates and asset purchase programs has driven yields on long-term sovereign debt to historically low levels (Figure 2). In large parts of Europe and Japan, short- and long-term yields remain near zero, a full decade after the onset of the financial crisis.

Economic developments since this unprecedented monetary stimulus provide valuable insights into the efficacy and limitations of monetary policy. On the positive side of the ledger, advanced economies have seen steady growth and significant declines in unemployment, with rates today near, or in many cases well below, those seen before the crisis (Figure 3). Bold monetary policy actions surely played an important role in averting far greater catastrophes and aided economic recovery.

However, this success was achieved only after a disappointingly slow recovery and many years of economic hardship. And, despite the improvement in the real side of economies, inflation rates have persistently been below central banks’ goals (Figure 4). The fact that inflation has been running below target in most advanced countries—the United Kingdom being the most prominent outlier—suggests that this challenge is not due to factors specific to a single country. Instead, there are more systemic factors at play.

Investors view these low inflation readings not as an aberration, but rather a new normal. This is evidenced by a broad-based decline in market-based measures of longer-run inflation expectations since the mid-2000s, with the UK again providing the exception (Figure 5).

This experience of slow recovery and persistently low inflation is a symptom of a deeper problem afflicting advanced economies—the root cause of which is a combination of low neutral interest rates and the lower bound on interest rates, a topic to which I now turn.

What’s Past Is Prologue

Underlying these events has been a sea change in the supply side of economies, owing to fundamental shifts in demographics and productivity growth.

Two demographic trends are evident: People are generally living longer and population growth is slowing. Overall life expectancy in member countries of the Organisation for Economic Co-operation and Development (OECD) has increased from about 65 years in the 1950s to nearly 80 years today, and is projected to exceed 90 years by the end of this century (Figure 6).1 Despite this increase in longevity, dwindling birth rates are bringing population growth to a standstill. In OECD countries, population growth averaged over 1 percent back in the 1950s and 1960s, but is now running at half a percent per year, and is expected to gradually fall before dipping into negative figures by 2070 (Figure 6).2

When it comes to productivity, the changes are no less dramatic. In OECD economies, growth in labor productivity—the amount produced per worker hour—has averaged a little over 1 percent per year since 2005, about half the pace seen over the prior decade (Figure 7)*. A major factor driving the slowdown is a dramatic decline in the growth rate of “total factor productivity,” or TFP, a measure of innovation and technological change.3

As Bob Gordon has taught us, U.S. productivity growth tends to cycle between periods of high growth in decades following fundamental breakthroughs in science and technology, and relatively fallow periods of steady, incremental improvements. All the evidence indicates that we are in one of the latter periods of “normal” productivity growth of 1 - 1.5 percent per year, and that things will likely stay that way until the next scientific or technological revolution.4

These global shifts in demographics and productivity have two important implications for the future of our economies and for monetary policy. First, slower population and productivity growth translate directly into slower trend economic growth. Second, these trends have contributed to dramatic declines in the longer-term normal or “neutral” real rate of interest, or r-star.

Slower trend growth reduces the demand for investment, while longer life expectancy tends to increase household saving.5 This combination of lower demand for and higher supply of savings, along with other factors, has pushed down r-star. With open capital markets, these global changes in supply and demand affect r-star globally.

The evidence of a sizable decline in r-star across economies is compelling. The weighted average of estimates for five major economic areas—Canada, the euro area, Japan, the United Kingdom, and the United States—has declined to half a percent (Figure 8).6 That’s 2 percentage points below the average natural rate that prevailed in the two decades before the financial crisis. A striking aspect of these estimates is that they show no signs of moving back to previously normal levels, even though economies have recovered from the crisis. Given the demographic waves and sustained productivity growth slowdown around the world, I see no reason to expect r-star to revert to higher levels in the foreseeable future.

The global decline in r-star will continue to pose significant challenges for monetary policy. Given the limited policy space for interest rate cuts in future downturns, recoveries will be slow and inflation below target. The limitation in the ability of central banks to offset downturns results in an adverse feedback loop, whereby expectations of low future inflation drag down current inflation and further reduce available policy space.7

Policymakers around the globe need to prepare for the challenges of navigating the new realities of slow global growth and low r-star. This necessitates new thinking and approaches to monetary, fiscal, and other economic policies.

Starting with monetary policy, central banks should revisit and reassess their policy frameworks, strategies, and toolkits, to maximize efficacy in a low r-star world. The Bank of Canada already regularly does this, and the Federal Reserve is currently undergoing a review of its framework and strategy.8 Absent such changes, central banks will be severely challenged to achieve stable economies and well-anchored inflation expectations.

Outside of monetary policy, there are a number of avenues by which fiscal authorities can enhance the resilience of economies to negative shocks. One is to strengthen the “automatic stabilizers” that provide a boost to the economy during a downturn. A second is to align debt management decisions more with monetary policy. For example, during a downturn, the fiscal authority could choose to shorten the duration of debt issuance to reinforce the effects of central bank quantitative easing. Third, regulatory and supervisory policies that support the resilience of the financial system can limit the economic effects of negative shocks.

Finally, fiscal and other economic policies can attack directly the sources of slow growth and low r-star. This includes raising public and private investment in human and physical capital, infrastructure, science and technology, and policies aimed at removing barriers to participation in the labor force and the economy more broadly.

The facts have changed, and so it is time to change our minds also. It is often said that change is hard. But, experience teaches us that it is better to prepare for the future than wait too long. Ultimately, failure to prepare often means preparation for failure. 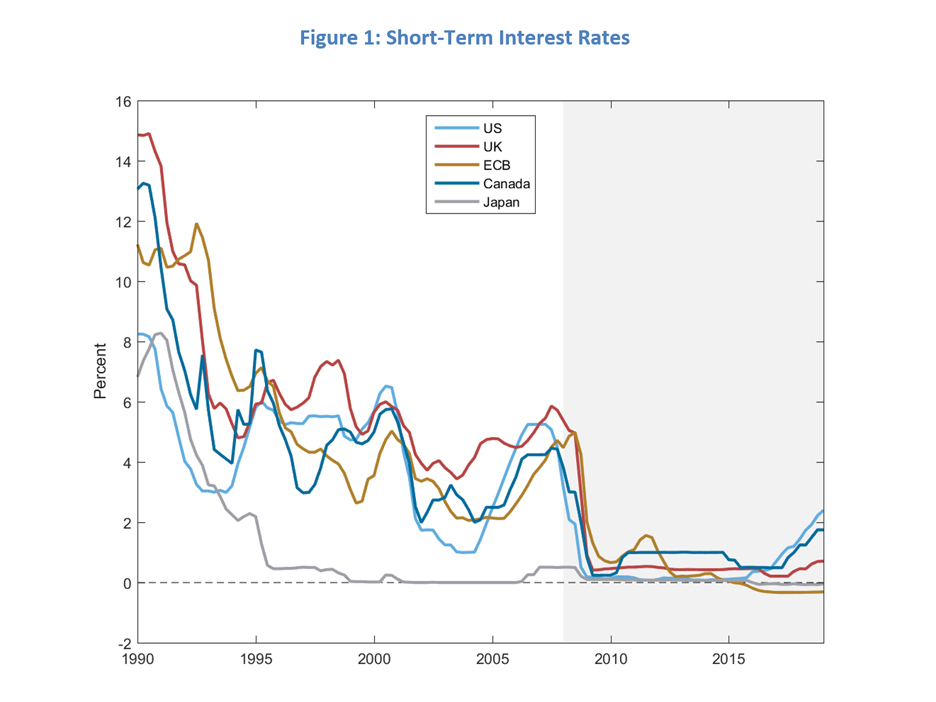 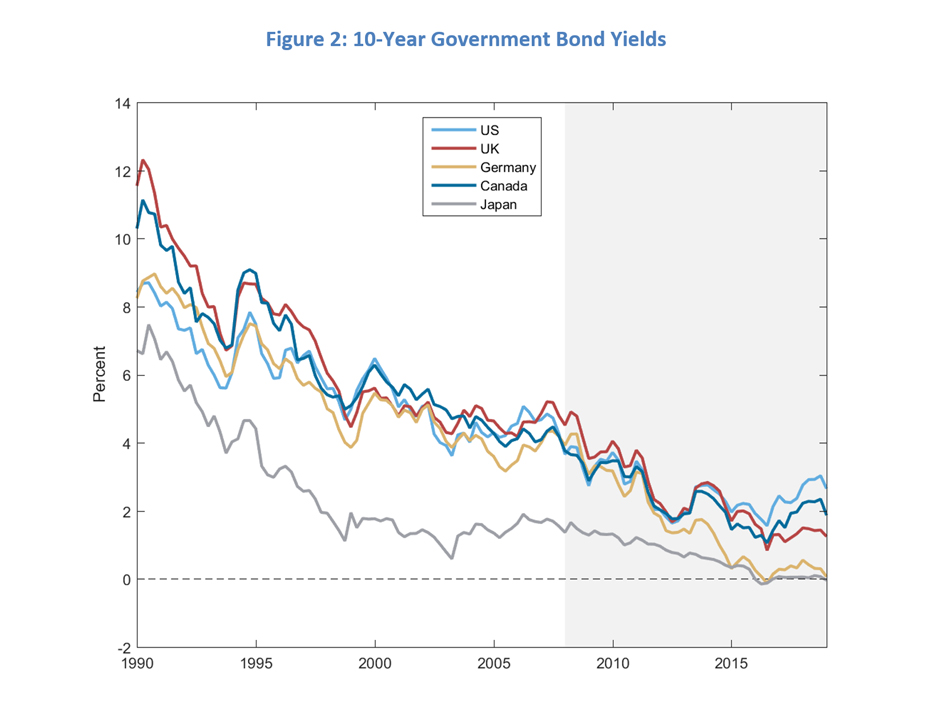 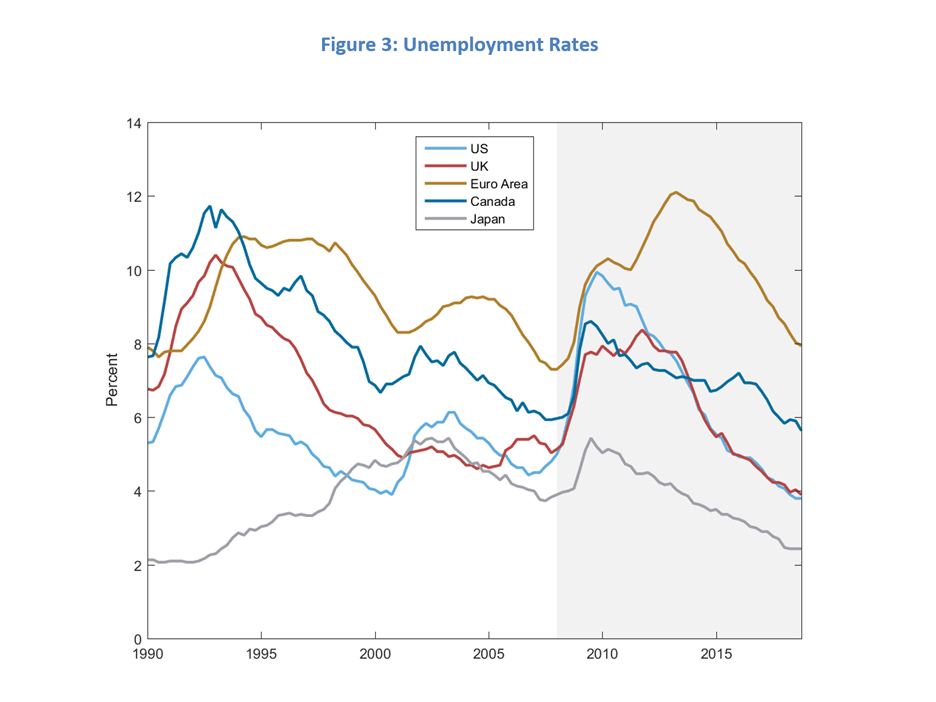 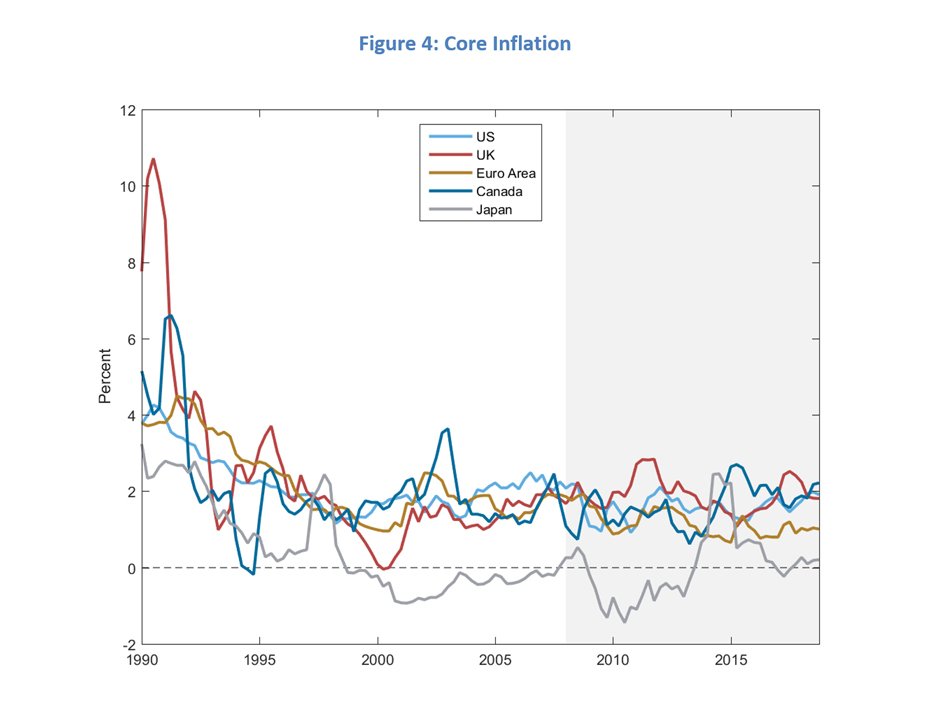 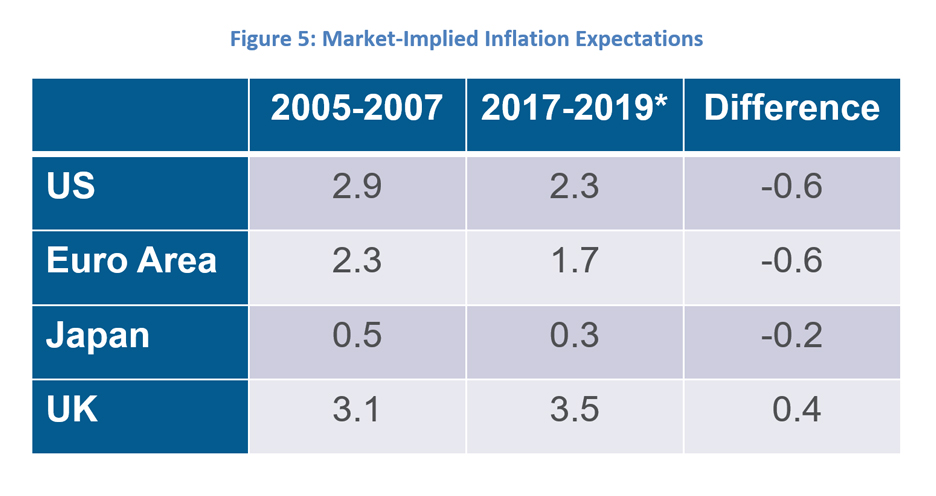 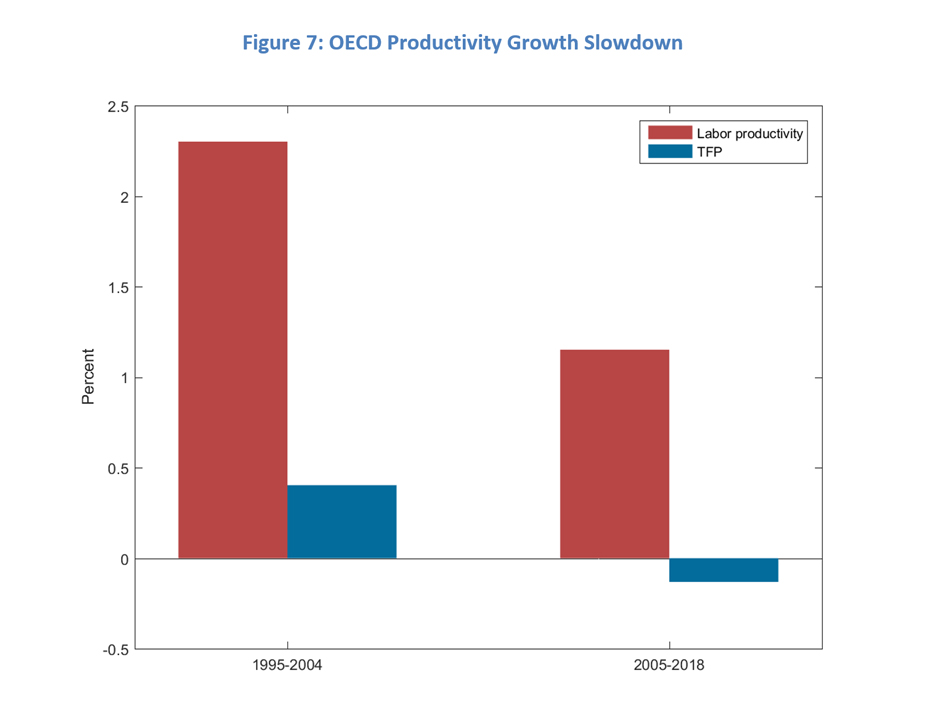 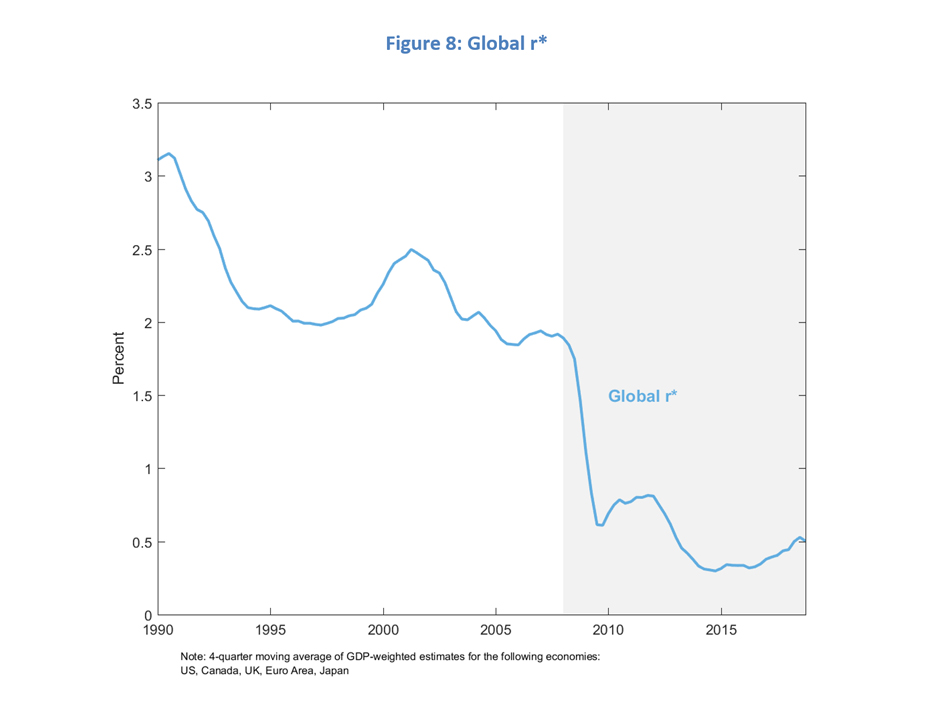 1 This is not true for all population groups. See Anne Case and Angus Deaton, Mortality and Morbidity in the 21st Century, Brookings Papers on Economic Activity, Spring 2017, in which they document declining life expectancy for middle-aged, less-educated non-Hispanic whites in the United States since the year 2000.