Key Findings
1. To understand credit demand, we asked firms about their business performance. Two-thirds reported stable or increased sales in Q1, higher than in 2010, but increased sales did not translate into employment growth.
2. Poll respondents divide into four groups based on their credit demand: applicants; discouraged borrowers that did not apply because they thought they would not be approved; deleveragers that did not apply because they were paying down debt; and firms with sufficient financing.
3. Most applicants sought $250,000 or less in credit and applied for working capital rather than investment financing.
4. Nearly two-thirds of applicants were approved for at least one product. Successful applicants had sizable revenues and appeared better able to provide collateral.
5. More applicants sought new credit products than to renew existing credit lines, but renewals had greater success. Overall, bank products were harder to obtain than non-bank financing.
6. Despite the 62 percent applicant success rate, most firms didnt get all of the credit that they wanted. The most common reasons were high outstanding debt and weak sales.
7. Firms that did not seek credit because they had sufficient financing are similar to credit applicants in being longer established and larger revenue firms.
8. While deleveragers did not explicitly state why they were paying down debt, their mixed sales performance suggests that some are deleveraging proactively, while others with weaker sales may be paying down debt out of necessity.
9. 27 percent of firms did not apply because they believed they would not qualify for credit. Nearly two-thirds have annual revenues of under $250,000, smaller than the other groups.
10. Discouraged borrowers cited low credit scores and weak collateral as their top credit concerns. Forty percent reported declining sales.
11. Poll results also show that most firms rely on financing from business earnings and personal/family wealth. Credit use varies across groups. Applicants and firms with sufficient financing commonly cite lines of credit, whereas discouraged and deleveraging firms cite credit cards as their top credit sources.
May 2011 Small Business Borrowers Poll: Summary
Restoring health to the small business sector, and the credit necessary to support its recovery, are continuing concerns. While recent surveys indicate an easing of underwriting criteria, data also show a 10 percent decline in small business lending between Q1 2010 and Q1 2011. The extent to which this drop is due to weak demand, impaired creditworthiness, or other factors is still under discussion.

The New York Feds Small Business Borrowers Poll takes a fresh look at borrower demand by asking firms not only about credit applications but also about reasons for not seeking credit. The results highlight the nuanced assessments that firms are making in formulating credit demands.

The poll finds that although 33 percent of firms sought credit and two-thirds were approved for a credit product, many firms chose not to apply because they were either paying down debt (19 percent), believed they would be turned down (27 percent) or already had sufficient credit (21 percent).

Credit applicants and firms with sufficient credit were similar in having larger revenues and sales increases in 2010 and in the first quarter of 2011. In contrast to these two groups are the 27 percent of the sample who did not apply because they believed they would be turned down. These discouraged borrowers attributed their decisions to concerns about low credit scores and insufficient collateral. A large majority of these firms reported flat or declining sales in the first quarter.

Nineteen percent of the sample did not apply because they were paying down debt. Their responses to questions about sales growth provide clues about why they prioritized deleveraging. Nearly equal portions of this group reported sales increases and sales declines, suggesting that some firms might be responding to broader economic concerns while others may be responding to weakened sales demand at their firms. Deleveraging firms tended to be smaller in revenues and employment.

Poll results also show that most firms rely on business earnings and personal/family wealth, but that credit use varies considerably across groups. Applicants and firms with sufficient financing frequently mentioned using lines of credit. In contrast, both deleveraging firms and discouraged borrowers are relying on credit cards.
May 2011 Small Business Borrowers Poll Findings

The Small Business Borrowers Poll asks small businesses in the Second District about their business performance and financial and credit experiences. The poll is distributed through a network of civil and nonprofit partners. The poll represents the perspectives of smaller firms (typically fewer than 10 employees and under $5 million in annual revenues) who respond to the questionnaire.

Note: The poll is not a random sample and thus the information should not be interpreted as a statistical representation of small businesses in the Second District or the nation. Rather, the results should be viewed as suggestive and analyzed with awareness of potential methodological biases.

The Federal Reserve Bank of New Yorks Office of Regional and Community Outreach polled small businesses about their business performance, financing choices, and borrowing experiences. The poll was conducted online and distributed through a network of local government and nonprofit partners. 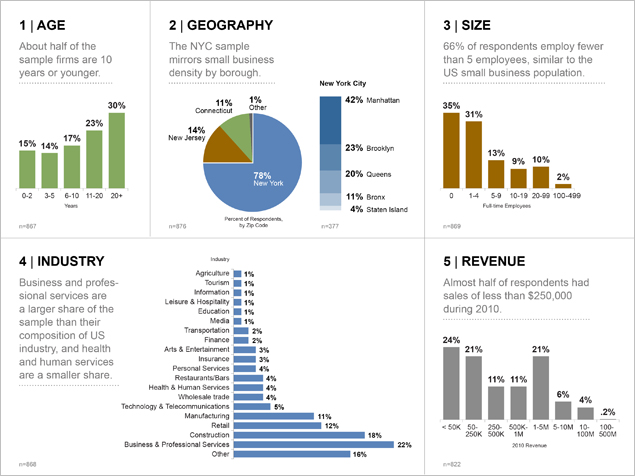 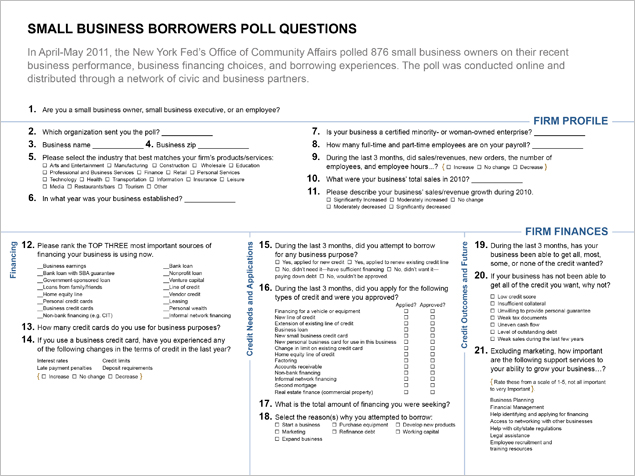