Good morning, and welcome to the Federal Reserve Bank of New York.
Today is the second and final day of our conference on mortgage contract design.  We are hosting this conference, in association with the NYU Stern Center for Real Estate Finance Research, because we view mortgage design as an important policy issue, with implications for monetary policy, household finance and risk management, as well as for the structure and stability of the financial system.

Mortgage debt is, by far, the largest household financial liability.  According to New York Fed data2, mortgages and home equity lines of credit make up 73 percent of U.S.  household debt, amounting to $8.7 trillion in liabilities outstanding.  Mortgage design also varies in striking ways through time and across countries and even regions; for example, in terms of the sensitivity of mortgage rates to market rates, borrowers’ ability to pay down or increase the loan balance, the ease with which loans can be modified, and the rights of junior lien holders.  Reflecting this international diversity, we are very happy to have panelists from the United Kingdom, Sweden and Denmark speaking today, as well as representatives from many foreign central banks and other international organizations in the audience.

This is also a particularly opportune time to think about mortgage contract design given the ongoing debate about housing finance reform in the U.S.  , and the future of the government sponsored enterprises Fannie Mae and Freddie Mac.

But debates about mortgage design are definitely not new! In fact, 40 years ago the Federal Reserve Bank of Boston hosted a well-known conference on "new mortgage designs"3, which included Franco Modigliani, later awarded the Nobel prize in economics, and current Federal Reserve vice chair Stanley Fischer.  An interesting contrast to today—the main focus of the Boston conference was the design of mortgages to deal with a high and volatile inflation environment.

The financial crisis and its aftermath have brought mortgage contract design back into sharp focus.  In my remarks today I will focus on one aspect of mortgage design; namely how the prevalence of adjustable rate mortgages, or ARMs, may affect a number of aspects of economic performance, including the pass-through of monetary policy, the sharing of interest rate risk, and the use of resources spent on refinancing. 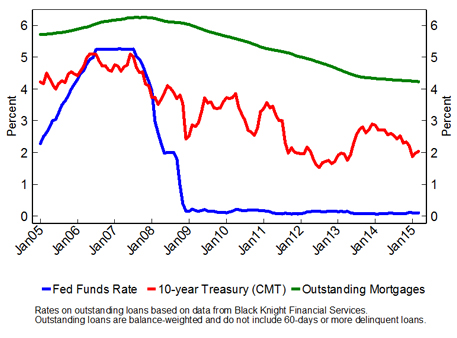 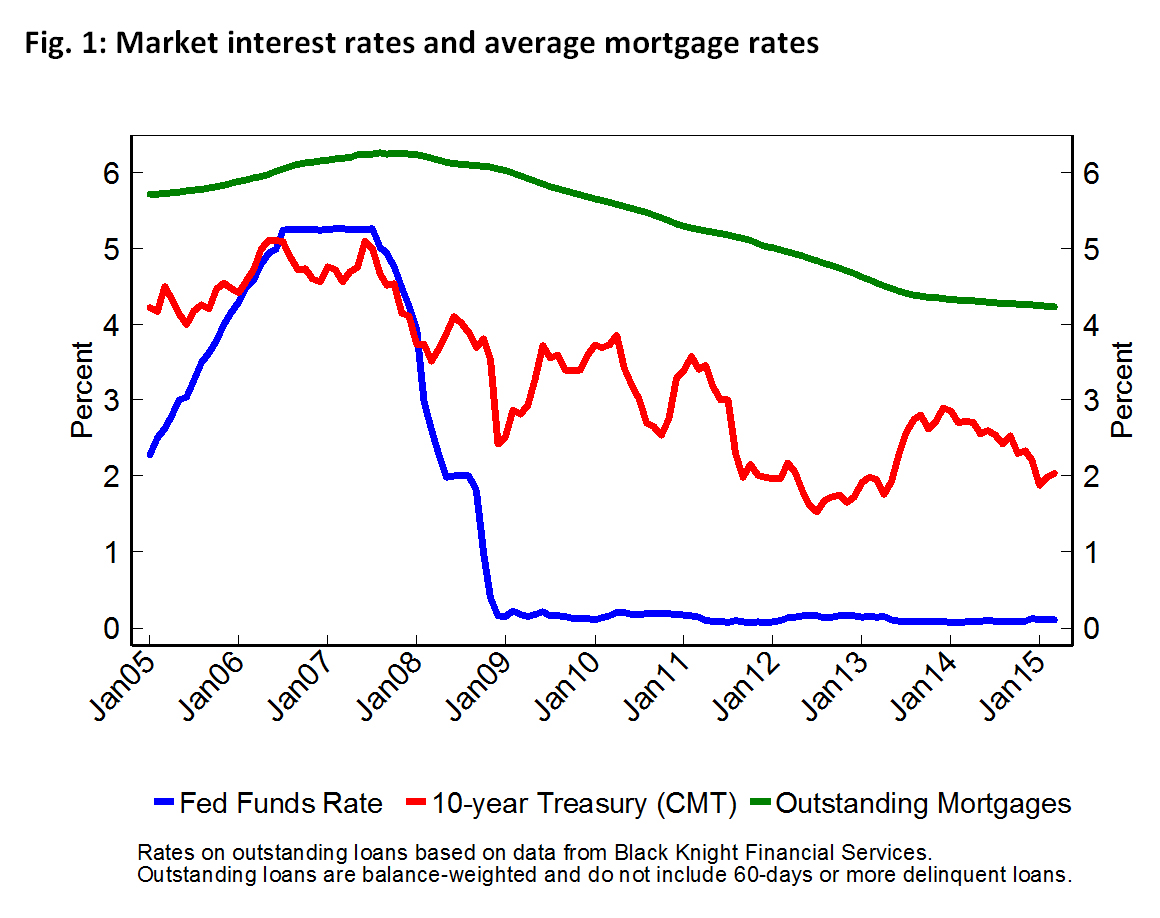 The federal funds rate dropped from 5-1/4 percent in August 2007 to the current 0-25 basis point range starting in December 2008.  Longer-term interest rates such as the yield on 10-year Treasury bonds also declined significantly, from about 5 percent in mid-2007 to a range between 2-3 percent in recent years.  As illustrated in the chart, however, the average interest rate paid on the total stock of outstanding mortgages in the U.S.  decreased relatively slowly and by a smaller amount over this period.

The source of the stickiness in mortgage interest rates is that the vast majority of outstanding mortgages in the U.S.  are long-term fixed-rate mortgages, whose pricing is tied to long-term interest rates, and which require borrowers to refinance to benefit from a decrease in market rates.  This refinancing process in earlier episodes has worked quite smoothly in transmitting lower market interest rates to the mortgage market—in particular during the large refinancing wave in 2002-2003.  But during the crisis, many borrowers were unable to refinance either because their property was worth less than the outstanding mortgage balance, or because they didn’t otherwise fulfill underwriting criteria that had also become much more stringent than during the boom.

These features surely limited the transmission of accommodative monetary policy through households’ balance sheets.  Furthermore, borrowers that were able to refinance and benefit from lower interest rates were mostly those with high credit scores and relatively lower debt balances.  The Administration responded to this limited pass-through by introducing programs such as the Home Affordable Refinance Program, or HARP, to enable refinancing for borrowers with high-LTV loans backed by Fannie Mae or Freddie Mac, or facilitating streamline refinances of FHA loans.  While these programs eventually reached a large number of borrowers, their implementation was complex. 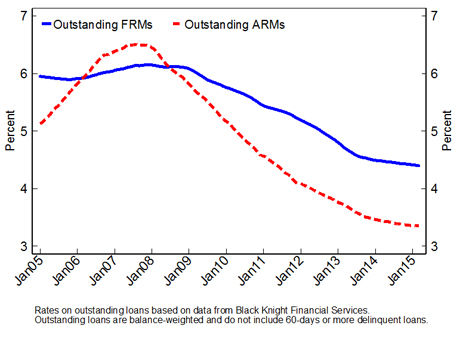 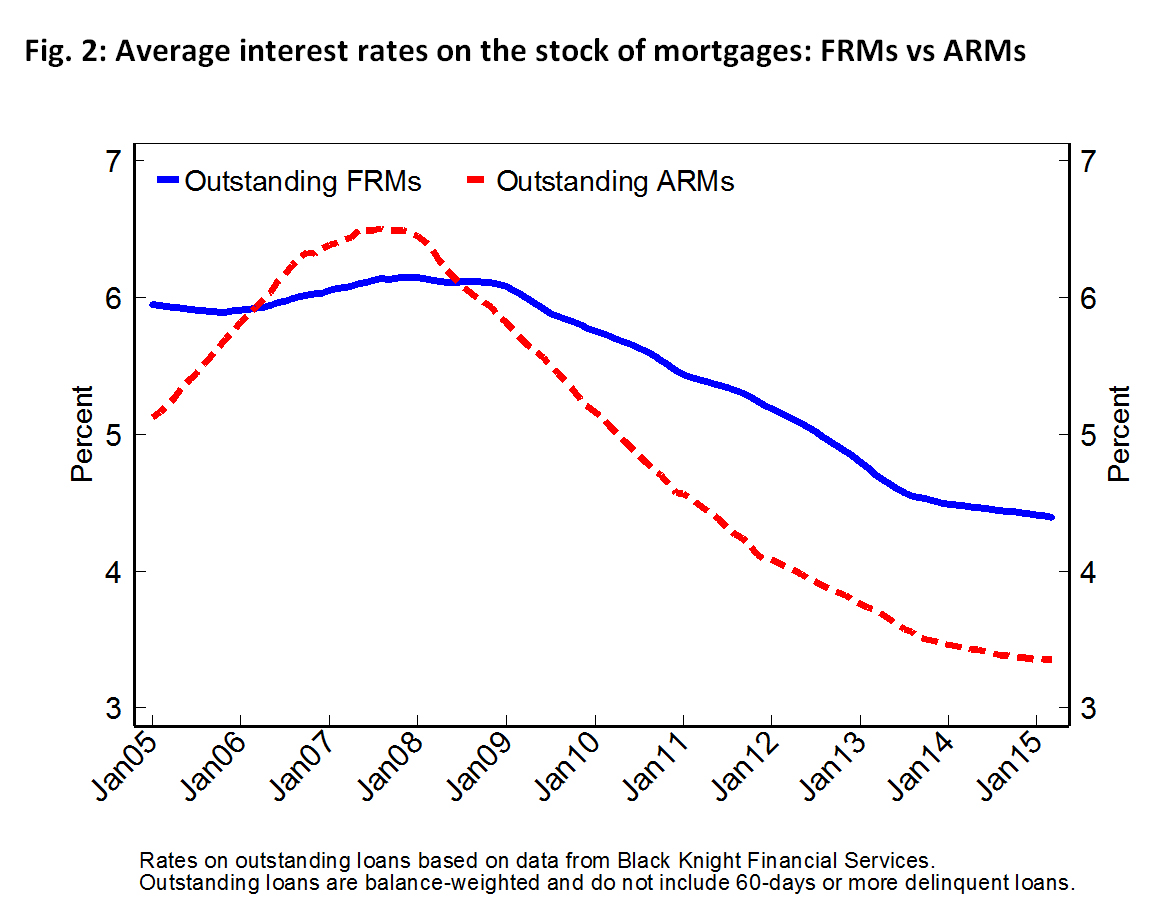 As a simple mortgage design counterfactual, had more borrowers had adjustable-rate mortgages, which are generally indexed to short-term interest rates, the pass-through of lower market interest rates would have been more direct.  As the Chart illustrates, the average interest rate on outstanding ARMs declined more rapidly than the rate on FRMs, even though in the U.S.  most ARMs only adjust after a rather long fixed-rate period (often 5 or more years) and then only do so infrequently (generally once or twice a year).

Crucially, ARM interest rate resets reduced mortgage payments without requiring the borrower to refinance, thereby benefiting a broad range of borrowers, including those with little or no home equity and/or low credit scores.  Research conducted here at the New York Fed has shown that these lower interest payments resulted in large declines in these borrowers’ default probabilities4.  And two papers presented in our academic sessions yesterday found evidence that these borrowers responded by increasing their consumption of durable goods5.

All this implies that a higher share of ARMs at the start of the financial crisis would likely have enhanced the effectiveness of monetary easing in reducing foreclosures and stimulating the macroeconomy.  More generally, the pass-through of monetary policy is likely to be stronger if a high share of mortgage debt has an adjustable interest rate, both in easing and tightening phases of the economic cycle.  6 As a result, the amplitude of interest rate adjustments by the central bank may not need to be quite as large to have the same economic effect.  This may be a particularly important consideration when the economy is at or close to the zero-lower bound on interest rates, as the U.S.  and many other economies are today.

A related consideration is that refinancing to a lower interest rate requires significant resource costs, which would not be incurred if the borrower’s interest rate adjusts automatically when market interest rates decline.  One estimate of the cost of refinancing a mortgage, which includes costs such as those on a property appraisal or title insurance, is $2,000 plus one percent of the loan amount.  7 Under this estimate, total refinancing transaction costs over 2008-2013 exceeded $100 billion.  8 Furthermore, the re-underwriting of existing loans leads to resource constraints in the mortgage origination industry during refinancing waves, frequently followed by lay-offs when the refinancing boom is complete.  9 Timing a mortgage refinancing optimally also requires time and attention from the borrower, and can lead to refinancing mistakes, particularly by less financially sophisticated households.  10

But do these considerations make ARMs preferable to FRMs, either from the point of view of monetary policymakers, or public policy more generally? Not necessarily.  FRMs have many advantages; for example they are simple for borrowers to understand, and clearly limit household exposure to interest rate volatility.  Consider too the incidence of interest rate adjustments: widespread reliance on ARMs may have unattractive distributional consequences for monetary policy, since it implies that a larger component of monetary transmission falls on a subset of highly indebted mortgage borrowers.  A risk-sharing argument may call for the effects of monetary policy to be more evenly spread across households.  On the other hand, monetary policy might have to adjust interest rates more dramatically in a world of widespread FRMs, which would affect some potential borrowers a great deal.  Furthermore, FRMs require an extensive financial-sector risk transfer system11, which may be costly, and may concentrate risks in systemically risky ways.  Thus, there are clearly many tradeoffs that need to be carefully considered.  Moreover, as academic research has emphasized, optimal mortgage choice depends on a borrower’s characteristics and financial circumstances.  It therefore seems desirable that the mortgage finance system makes a range of different contracts available to borrowers, and be open to sensible innovations in contract design.  12

Although I have focused on ARMs, interest rate adjustability is only one of many important aspects of mortgage design that will be considered in the discussions today.  Another important issue, for example, is how home price movements are shared between the borrower and lender.  Home price risk is already partially borne by lenders and other mortgage investors, since a fall in home prices increases mortgage defaults and foreclosures, and associated credit losses.  But a number of proposals have argued that mortgage balances should be explicitly indexed to movements in home prices in some way.  13

I hope I have whetted your appetite for today’s events.

3See New Mortgage Designs for an Inflationary Environment for the agenda and proceedings.

6 This is also an implication of the model presented in Auclert, 2015, Monetary Policy and the Redistribution Channel.

10 This is documented for instance in another paper presented yesterday, by Andersen, Campbell, Meisner, Nielsen and Ramadorai (2015), "Inattention and Inertia in Household Finance: Evidence from the Danish Mortgage Market":

11 For evidence that lenders are less willing to originate FRMs if mortgage securitization markets are illiquid or frozen, see Fuster and Vickery (2015), "Securitization and the Fixed-Rate Mortgage", Review of Financial Studies, 28(1), pp.  176-211.  Research presented in yesterday’s academic sessions finds that a bank’s access to external bond finance influences the composition of mortgages it originates: see Foá, Gambacorta, Guiso and Mistrulli (2015), The Supply Side of Mortgage Finance.

12 One proposal for such innovation that would have increased pass-through during the crisis is the "automatic stabilizer mortgage" of Eberly and Krishnamurthy, 2014; see /research/conference/2015/mortgage_design/Eberly_Janice_052015.pdf