New York Fed researchers recently published an in-depth study of the behavior and economics of large and complex banks. In an effort to inform public debate on the “too-big-to-fail” question, the authors look broadly at the costs and benefits of bank size, the sources and measurement of bank complexity, and strategies for preventing disorderly failures. Check out the posts in a Liberty Street Economics blog series, which link through to the more detailed Economic Policy Review papers:

Introducing a Series on Large and Complex Banks outlines the key themes and findings of the project.

Evidence from the Bond Market on Banks’ “Too-Big-to-Fail” Subsidy finds that the largest firms pay less than smaller peers to borrow in the bond market, with the gap proving wider for banks than nonbank financial and nonfinancial firms, suggesting a unique advantage for the biggest banks. 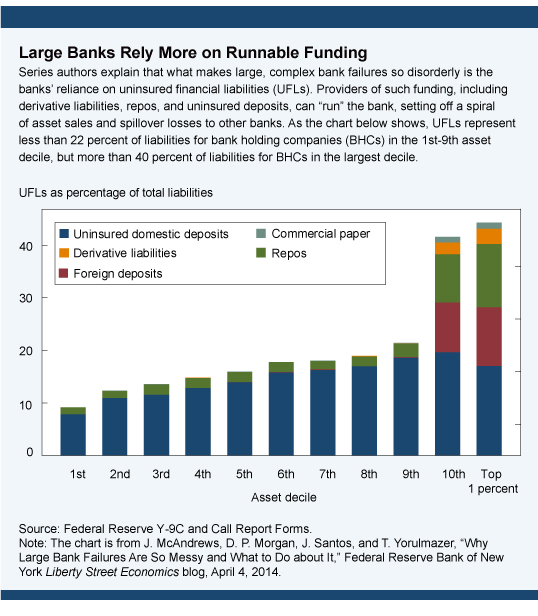 The Growth of Murky Finance looks at the historical growth of the entire financial sector, including banks and shadow banks, relative to the rest of the economy.

Evolution in Bank Complexity studies the acquisition patterns of banks and other financial firms over the last thirty years and considers the implications of a more complex industry configuration for supervision and resolution.

Resolution of Failed Banks outlines the private and social costs associated with bank failure and critiques the methods that are widely used to resolve banks.

The Failure Resolution of Lehman Brothers provides a detailed postmortem of the investment bank’s bankruptcy, raising questions about the efficacy of the traditional Chapter 11 bankruptcy process for resolving large financial firms.

Why Bail-in? looks at bail-in-able long-term debt as a powerful new option for reducing the cost and instability of large bank failures.

Why Large Bank Failures Are So Messy and What to Do about It? considers strategies for resolving a large bank without triggering a run on its funding.

Parting Reflections on the Series on Large and Complex Banks summarizes the analysis and discusses how findings might shape a course of action for dealing with the “too-big-to-fail” problem.

A Special Issue on Large and Complex Banks

Related New York Fed Content
The SOMA in Perspective
The Evolution of Banks and Financial Intermediation
By continuing to use our site, you agree to our Terms of Use and Privacy Statement. You can learn more about how we use cookies by reviewing our Privacy Statement.