FISCAL DEVELOPMENTS
An Update on the Competitiveness of Puerto Rico’s Economy
July 31, 2014

This is taken from the section titled "Fiscal Developments in Puerto Rico: 2012–14" in the full report.

In this report, we discuss the outlook for the sustainability of Puerto Rico’s debt and outline recent Commonwealth efforts to strengthen the Island’s public finances: 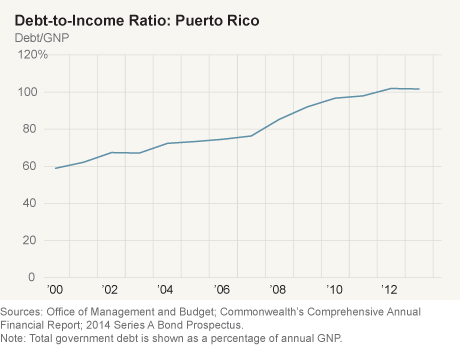 2Debt payable from revenues from "internal sources," that is, income taxes, is guaranteed by the Puerto Rican constitution.

Note: Gross national product is used for Puerto Rico and gross state product for the states and Washington, D.C.

Puerto Rico Profile
Blog: Puerto Rico Employment Trends–Not Quite as Bleak as They Appear
Current Issues: Trends and Developments in the Economy of Puerto Rico
By continuing to use our site, you agree to our Terms of Use and Privacy Statement. You can learn more about how we use cookies by reviewing our Privacy Statement.