WHERE PUERTO RICO STANDS
An Update on the Competitiveness of Puerto Rico’s Economy
July 31, 2014

This is taken from the section titled "Introduction" in the full report.

Economic activity in Puerto Rico remains generally flat at a depressed level and there are no strong signs that a meaningful recovery is taking hold. While Puerto Rico’s economy has historically paralleled the U.S. mainland economy, the Island’s latest downturn started earlier and was much steeper and more prolonged. Puerto Rico has now been in a slump since 2006. 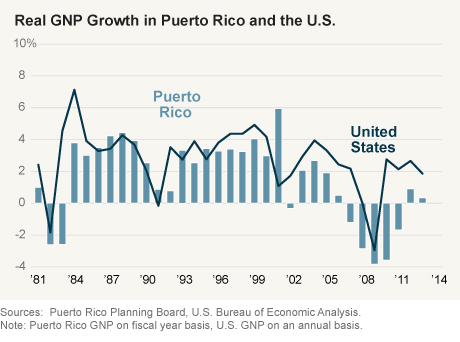 More recently, serious fiscal challenges have surfaced that are closely interrelated with the Island’s weak economic performance. Persistent deficits in the Commonwealth’s fiscal accounts as well as mounting deficits in the operation of several major public corporations have substantially raised the Island’s overall public debt, leading to serious concerns about whether public debt at these levels can be sustained. 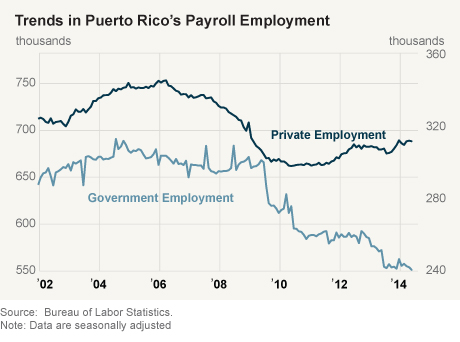 In light of the rising fiscal pressures Puerto Rico faces, the Federal Reserve Bank of New York has undertaken this update of an earlier report that examined the competitiveness of the Island’s economy. That report highlighted a number of features of the economic environment in Puerto Rico that were constraining economic growth. Here, we focus on an analysis of the Island’s financial health. The recent downgrading of Puerto Rico’s public debt to non-investment-grade was a strong signal that the current fiscal situation poses potentially serious risks to the Island’s economic future. Our analysis focuses on the factors leading to the sizable buildup of public debt and the key variables that will determine its trend.

The clear challenge going forward will be for the Commonwealth government to continue making progress on efforts to raise the economic growth rate while at the same time taking credible steps to constrain the buildup of debt. Other countries as well as some U.S. states and municipalities, including New York City, have faced difficult economic choices similar to those that Puerto Rico must now address. The leadership of many of these jurisdictions took the steps necessary to manage this trade-off and successfully returned their economies to fiscal health. 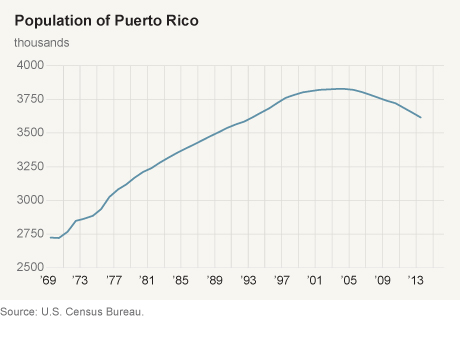 The Island appears to face two alternatives: either manage its own economic adjustment and put the Commonwealth on a secure fiscal basis, or wait for outmigration and the discipline of the market to force an even more painful adjustment, particularly for those unable or unwilling to leave the Island. Thus, the demanding choices Puerto Rico makes today will affect its long-run economic prospects and the future livelihood of its residents. A better future for Puerto Rico requires decisive leadership today.

Puerto Rico Profile
Blog: Puerto Rico Employment Trends–Not Quite as Bleak as They Appear
Current Issues: Trends and Developments in the Economy of Puerto Rico
By continuing to use our site, you agree to our Terms of Use and Privacy Statement. You can learn more about how we use cookies by reviewing our Privacy Statement.