An Update on the Competitiveness of Puerto Rico’s Economy 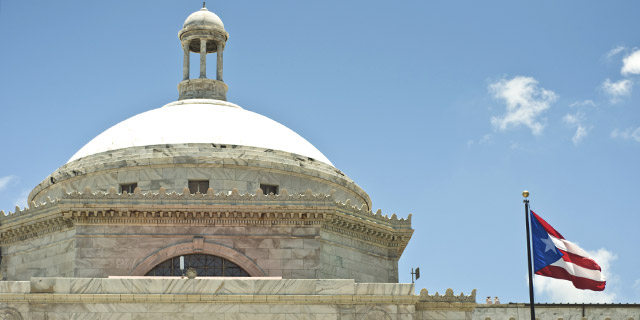 In light of the rising fiscal pressures Puerto Rico faces, the New York Fed has undertaken this update of a 2012 report examining the competitiveness of the Island's economy.
Download full report
English | Español

Our Commitment
At the Federal Reserve Bank of New York, we are proud that Puerto Rico is part of the Second District, which we represent in the Federal Reserve System. We have a deep commitment to the people of Puerto Rico and to the future growth and prosperity of the Commonwealth. Our commitment is reflected in the ongoing work of our Outreach and Education teams with our many partners on the Island, and in the research conducted by our economists, who monitor local economic conditions and analyze issues that affect the Island’s economy.

Where Puerto Rico Stands
Economic activity in Puerto Rico remains generally flat at a depressed level and there are no strong signs that a meaningful recovery is taking hold. Recently, serious fiscal challenges have surfaced that are closely interrelated with the Island’s weak economic performance. In light of the rising fiscal pressures Puerto Rico faces, the Federal Reserve Bank of New York has undertaken this update of an earlier report that examined the competitiveness of the Island’s economy.

Challenges
In 2012, we highlighted some of the key challenges facing Puerto Rico’s economy. In this report, we revisit each of these challenges and discuss the progress made in several areas:

Fiscal Developments
In this report, we discuss the outlook for the sustainability of Puerto Rico’s debt and outline recent Commonwealth efforts to strengthen the Island’s public finances:

Steps toward Fiscal Sustainability
Puerto Rico has an opportunity to restore its fiscal health, but it needs to act. In the spirit of assisting the Commonwealth in this endeavor, we describe the steps required to improve fiscal outcomes and restore access to low-cost credit:

Andy Haughwout
Senior Vice President and Head of the Microeconomic Studies Department in the Research and Statistics Group
andrew.haughwout@ny.frb.org


Media Inquiries:
Betsy Bourassa
(212) 720-6885
betsy.bourassa@ny.frb.org
By continuing to use our site, you agree to our Terms of Use and Privacy Statement. You can learn more about how we use cookies by reviewing our Privacy Statement.